Mahasangha ~ Zen and the Shakuhachi 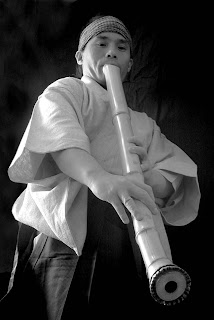 Alcvin Takegawa Ramos, Shakuhachi Master and founder of Bamboo-In Shakuhachi Retreat Centre will present a talk about the origins and history of the Shakuhachi Flute, it's relationship to Zen Buddhism and it's use as a method of awakening. The audience will also experience the music of the Shakuhachi in a recital by some of Alcvin's students.

WHAT: Shakuhachi Lecture and Recital
WHEN: Sunday May 27th, 2007 at 1:00pm
WHERE: University of Victoria Interfaith Chapel
COST: Admission is by donation.

About the Shakuhachi Flute:

The ancient 5-holed, vertical bamboo flute of Japan called the shakuhachi has a history much veiled in mystery. With roots that span back millennia to middle and near east, with much of it in China, the shakuhachi made its way into Japan in the 6th century. First used as a court instrument in the gagaku orchestra, it went underground for hundreds of years to re-emerge in the 16th century when Buddhist monks transformed it into a tool for meditation and self-discipline used also by samurai warriors as a replacement for their swords. For several centuries the shakuhachi was used as an adjunct of self- realization and enlightenment which gave rise to the core of shakuhachi solo sacred music called "honkyoku" (original pieces) which were inspired by meditative practice (zen) and communion with the natural environment. Honkyoku forms the basis of shakuhachi music and spirituality and expresses the true beauty of the instrument.

About Alcvin Takegawa Ramos:
Alcvin is a unique shakuhachi musician who is keeping the tradition of learning and playing the koten honkyoku (original zen pieces for shakuhachi) strong while exploring and expanding the boundaries of the instrument. Born and trained in Japan, Alcvin is the foremost teacher and performer of shakuhachi in Canada. He was the first non- Japanese to win a prize in the all-Japan Shakuhachi competition and received his shihan (masters) license from one of the greatest shakuhachi masters in history, Katsuya Yokoyama. In 2003 he and his wife opened the Bamboo-In Shakuhachi Retreat Centre on the beautiful Sunshine Coast. Alcvin is involved in many activities dedicated to the learning of shakuhachi. Being an avid practitioner of Zen and student of Buddhism, Alcvin doesn't make the separation between zen, shakuhachi, and musical practice. Alcvin believes the shakuhachi to be the gate to the inaudible, mystery of the Universal Body, the All experience.

This Event is Sponsored by The Victoria Zen Centre, and Interfaith Services of UVic.
For more information contact Ven. Eshu eshu@zenwest.ca
For a map to the chapel click link below.
Posted by Eshu Martin at 2:39 PM No comments:

Nitartha Institute is accepting applications until the end of this month for its Summer Institute in , , 45 minutes from . We hope you can join us:
Session 1: July 7 - 21
Session 2: July 21 - Aug 4
For more information and to apply, please visit www.nitarthainstitute.org. You can also send an email or call:
Steve Seely
Managing Director
206-407-3427
steve@nitartha-institute.org
Posted by Victoria Shambhala Centre at 10:01 PM No comments:

Weekthun at Sea-to-Sky Retreat Center
Bellingham Shambhala Center will be hosting our annual Weekthun at Sea-to-Sky Retreat Center near Whistler, B.C., Canada, September 1 - 8, 2007. This year it will be led by Martin Evans from Vancouver, B.C.Retreat Life StyleSSRC is located well above sea level in the coastal mountains of B.C. You can expect a variety of weather conditions. The center is beautifully situated overlooking an alpine lake and includes a main house, an isolated pavilion for practicing, and one or two cabins. There are indoor showers and bathrooms and electric lighting.There are three accommodation options available for this Weekthun:
Option 1: Sleeping in the Main House in dormitory style bedrooms (3 to a room) or on an open indoor balcony floor on mattresses. $425 CA (about $395 US).
Option 2: SSRC has several large, sturdy tents attached to platforms. $350 CA (about $325 US) at two persons per tent.
Option 3: Driving your own camper to SSRC and staying in it. $325 CA (about $305 US).
There is a 5% discount if payment in full is received by SSRC by June 30.For more information or to register, please contact registrar Robin Rieck at robinrieck@msn.com or (360) 676-0315.
Posted by Victoria Shambhala Centre at 10:17 PM No comments:

Join us May 6th at 5:00 PM to celebrate the three year anniversary of Ngakpa Kalzang's arrival to teach at Thubten Choling in Duncan, BC. For more information please contact us at 250-748-6028, or visit our website at: www.thubtencholing.com

Hope you can join us!

The workshop will involve Bill talking semi-formally, general discussion, writing exercises, and also guided meditation/contemplation. The focus of the session will be on the creative process, in particular how words are typically used, and how they could be used in a fresher way, giving rise to writing that can wake up both the writer and the reader

Bill is known internationally and is a respected writer and teacher.

He is a creative writing profesor at UVic, and has published 5 novels. In 2003, Bill was awarded the Timothy Findlay award for Canadian male writer in mid career. For more information about Bill please see. http://finearts.uvic.ca/writing/faculty/gaston.html

The workshop is part of the Shambhala Arts Festival, a festival of contemplative and meditative arts, and is being held at the Victoria Shambhala Meditation Centre
#1-2033 Belmont Avenue *Victoria * V8R 3Z7 * 383-9108victoria.shambhala@gmail.com

Posted by Victoria Shambhala Centre at 10:38 AM No comments: