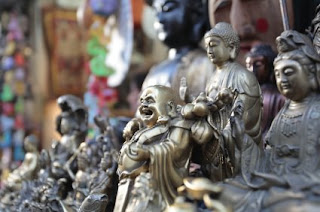 Background and purpose:
At the Victoria Zen Centre, it is our vision to be a dynamic community and sustainable environment for the practice of living Zen in our families and in our world.

We are committed to realizing this vision by offering:

Since 1980 the Sangha of the Victoria Zen Centre has grown from just 10 members, into a thriving community of practice with more than 500 individual practitioners taking part in our programmes and activities in 2007 alone.

In order to realize our vision fully, we believe it is imperative for the Victoria Zen Centre to be sustainable, and to establish a permanent place of practice and training in Victoria, British Columbia.

To this end, we are establishing a Wall of 1,000 Buddhas. The Wall of 1,000 Buddhas is a fundraising initiative aimed at making our Vision a reality. It is based on the understanding that you - our donors, and the act of Dana (selfless giving), are the foundation of our Zen practice, and of our community. If we are to realize our vision, it will be as a result of our donors, and we believe that your generosity deserves to be acknowledged.

Contributing to the Wall of 1,000 Buddhas will provide a lasting reminder of the practice of Dana. We will create a symbol of our community working together to realize our common vision that will be experienced by all that enter the Victoria Zen Centre in the future.

We will be inaugurating the Wall of 1,000 Buddhas as part of our celebration of the Buddha’s Birthday on Sunday May 25, 2008.

Creating a personal connection and relationship with the Victoria Zen Centre is an important aspect of this project. Therefore, we recommend that each donor select and acquire the Buddha figure that they wish to place on the Wall of 1,000 Buddhas themselves.[2] However if time, distance, or circumstances make this impossible, at your request, we would be happy to select an appropriate Buddha figure on your behalf.

[1] The Victoria Zen Centre is a federally registered Charity, and will issue a receipt for all contributions received with name and address information through December of each year.

[2] Figures may represent any Buddha or Bodhisattva. The Abbot and Board of the Victoria Zen Centre reserves the right to determine whether a particular figure is appropriate for display.
Posted by Eshu Martin at 3:20 PM 2 comments:

Retreat to explore the Zen of homelessness

Below is an article from last Monday's Victoria Times-Colonist about the upcoming Victoria Street Retreat. See below…

BTW – if you are interested in joining us on the retreat, please let me know. About half the spots on the Street Retreat are already gone.


Retreat to explore the Zen of homelessness
Buddhism practitioner gets a taste of challenges faced by those on the streets
Judith Lavoie, Times Colonist
Published: Monday, March 31, 2008

Entrepreneur Eric Jordan never realized he would be a lousy panhandler until he found himself in an area of Vancouver where, a few years previously, he had raised $35 million in venture capital for his company.

Jordan, 38, founder and former CEO of the software company PureEdge Solutions, was on a street retreat with a group of Zen Buddhists and it was his first shot at panhandling.

"I found panhandling very ego-destroying," said Jordan, who noted it was one of the few situations in life that demand you talk to people who then pretend you do not exist.

"I got a grand total of one root beer can," said Jordan, who is the executive in residence at the University of Victoria business faculty and an active member of the Victoria Zen Centre.

What was even more alarming was his realization that, even though he thinks of himself as a generous person, he would not have given money to himself and would have questioned why an apparently healthy person was asking for spare change instead of working.

"I realized how many judgments I would make," said Jordan, who lives in an Oak Bay home with his wife and three children.

Jordan found the experience so powerful, as he struggled to make a bed from cardboard or socialized with drug dealers, that he is organizing a street retreat in Victoria this summer.

Jordan and 13 other volunteers will live on the street from July 31 to Aug 3, avoiding shelters so they do not take beds from those who need them, but eating in soup kitchens and mingling with the street population.

Under the leadership of Zen Sensei Genro Gauntt, the group will meditate twice a day, and, in a non-judgmental way, bear witness to what is going on.

"Most people think it is odd, but sort of odd-good," Jordan said.

Others accuse them of being no more than tourists, but even tourists gain some understanding of the places they visit, he said.

The first thing each volunteer has to do is raise the $400 cost of the retreat by going to friends, family or associates and asking for donations.

"To sincerely engage in this experience we need to humble ourselves at the outset, attempt to explain to others our reasons for participating and beg for their support," say the instructions.

One third of the money goes to the organizing group -- Hudson River Peacemaker Community -- and the rest will go to street agencies used during the retreat.

Everyone brings emotional baggage to the retreat, and Jordan knows what propelled him into it.

"The short answer is I was abused as a child and many of those abused as children end up on the street," he said.

Jordan did not take the path of drugs, alcohol and street life, but the retreat was like walking the path he could have taken.

"It brings a level of empathy you didn't have before," he said.

Rev. Al Tysick of Our Place said more awareness of street problems is always good, provided people realize a four-day retreat does not replicate the reality of people living on the street indefinitely.

"They're not going to be slugging on in the cold December nights," he said.

Street agencies will welcome donations from the group, but the bigger question is what happens afterward, Tysick said.